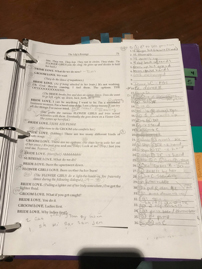 The Lily's Revenge took place in 2 theaters and a lobby, and include a parade and haiku battle that moved entirely outside our space. Keeping all of those elements from collapsing into chaos required a bigger stage management team than usual, so student Julia Handley '18 spoke to Jessi Dimmock, one of the members of that team, about the group's process for keeping all parts moving smoothly.

One of the duties of a stage manager is to keep track of the blocking for the show. Can you summarize exactly what that means?

Stage managers record all of the blocking for the show. We take down entrances and exits, crosses, choreography, and any other planned movement throughout the show; we record exactly where those happen. We do this so that when we call cues, we know exactly what is happening at every moment, so we can better time the calling of those cues. Also, if someone is ever absent from rehearsal or forgets their blocking, we have a documentation of what is supposed to happen. Furthermore, stage managers in the professional world take down blocking so that as new actors take the places of older ones, they can be instructed on exactly what to do. Also, if someone were to ever want to remount the show just the way it was, these blocking notes would be how they would recreate it.

With a 31 person cast, The Lily's Revenge has TONS of movement that we need to record. Thus, in rehearsals, Liz Diamond (our Production Stage Manager) would have at least two ASM's taking down blocking notes. The Lily's Revenge moves quickly, so with two people recording blocking, less is missed. We are also constantly refining those blocking notes based on changes that are made in rehearsal. Thus, every rehearsal from January until tech has had two stage managers taking down blocking notes to ensure they have stayed accurate. We then share all of our blocking notes at the end of rehearsals to make sure we all have the same information.

With this show, you have several variables going on; i.e multiple locations, several acts, a cast of over 30 people, etc. How do you deal with that?

I am definitely feeling hungry. I am pretty much constantly hungry since the show is four hours long and for me, that's a long time to go without snacks! Though I am feeling pretty tired after our lengthy tech weekend, I am beyond excited to start having an audience; I cannot wait for us to open on Friday and get to showcase what we have all worked so hard on all semester!