A notable sabbatical for Associate Professor Megan Lewis: A major book award, a semester at sea

Like many UMass Amherst faculty members, Megan Lewis has a sizable body of published work. What's remarkable, however, is that she's won awards for that work in South Africa.

While she was on her sabbatical journey around the world (detailed below), Lewis learned that her book, Magnet Theatre: Three Decades of Making Space, co-edited with Anton Kreuger and published by UNISA Press, had received the Hiddingh-Currie national book award in South Africa.

This award, presented annually by UNISA Press, recognizes “An academic or artistic work of the highest quality which contributes to the understanding or development of the discipline, or A work that addresses a specific need or problem in society.” In announcing the award, UNISA (the University of South Africa press), offered the following praise for Lewis and Kreuger's work: "Offering a dialogue between internal and external perspectives, as well as perspectives from performers, artists, and scholars, this book analyses Magnet’s many productions and presents a rich compendium of the work of one of the most vital physical theatre companies in Africa."

In an article about the award published by Semester at Sea, Lewis said, “I’ve been following South African theatre for 20 plus years now. One of the theatre companies I’ve always been totally drawn to was the Magnet Theatre.”

Lewis, who is known for her efforts to give South Africa's arts and culture the consideration they're due, has a long-standing relationship with members of Magnet Theatre and brought the company to UMass in 2013 to present Every Year, Every Day, I Am Walking, one of its signature pieces. In addition to the performances, the company led workshops and delivered the Rand Lecture for the Department of Theater.

“They do high-caliber performances, just stunning,” Lewis said. “When you talk about how to tell a story with your body, there’s nobody that does it better as far as I’m concerned.”

Representing UMass Theater around the world

Editor's Note: When UMass Theater faculty members are away from the department, they're still busy with projects, be they creative, scholarly, or pedagogical. When Megan Lewis went on sabbatical, she decided to travel the world with Semester At Sea. She kindly wrote us this travelogue.

After earning tenure in 2017, I took a sabbatical in Spring 2018, and traveled 26,000 miles around the world with Semester at Sea (SAS), visiting 14 countries: Mexico, Hawaii, Japan, mainland China and Hong Kong, Vietnam, Myanmar, India, Mauritius, South Africa, Ghana, Morocco, Portugal, and London in the UK. It was a life-changing experience for me, personally and professionally. I used this time in the full spirit of the “shabbat” at the root to of the word sabbatical: time to rest and recharge, to reconnect with myself, to restore my creative and intellectual batteries after working so hard over the past 6 years earn tenure.

When I boarded the MV World Odyssey in January 2018, I embraced the notion of change and fluidity. I knew where I was going but not what I would discover there. I lived on a ship on the vast fluid ocean in 200 square feet of cabin for 4 ½ months. Some days as I was teaching, the ship would rock me off my feet. Other days the ocean was as calm as glass. Every day offered a different texture to the water, a different hue in the sky, clouds or no clouds, storms or meditative calm. The ocean taught me about the fluidity of existence, about the interconnectedness of being, and of the immensity and malleability of water as a metaphor for life.

My sabbatical was exactly what it was intended to be: a period of rest and restoration – and an opportunity to reignite my research and teaching passions and return to UMass with renewed energy and vigor. The lessons I learned on my journey around the world were numerous and transformative. I reflected deeply about practicing loving kindness (a Buddhist concept) in a world that seems to gets uglier by the day. I meditated on questions of work/life balance. I practiced mindfulness and self-compassion (more Buddhist concepts). I also learned that there is something humbling about circumnavigating the globe, as you gain a sense of the true size, scope, and diversity of our planet. Living on a ship on the ocean gives you a firsthand appreciation of the impacts of global climate change and is also a lesson in how little space we actually need to be healthy and happy (so it was a lesson in humility and the excessiveness of American capitalistic culture). And seeing the rich and diverse tapestry of the world from the perspective of the Global South is enlightening, putting American culture, the current political regime, and the perils and possibilities of our way of life into perspective. 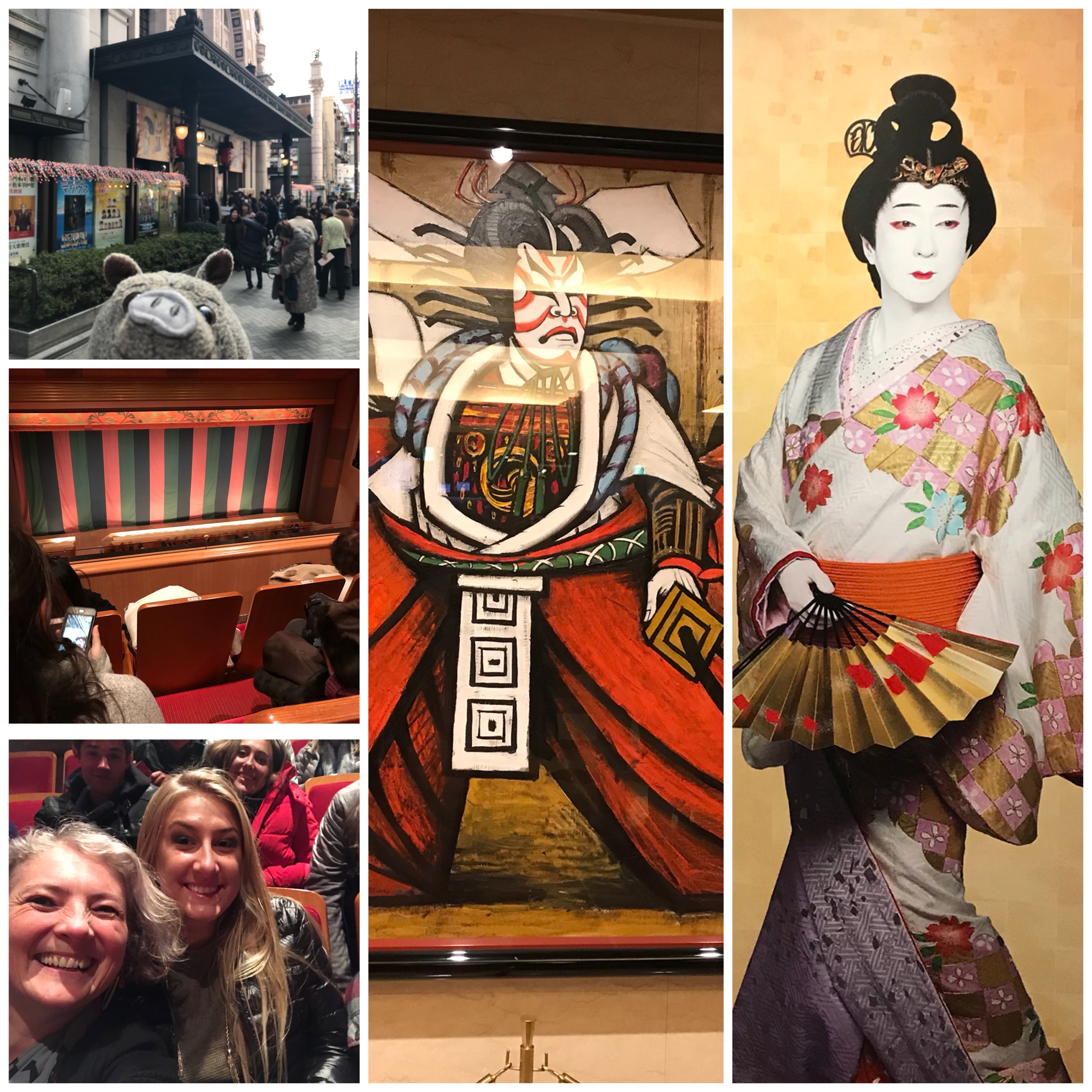 The most powerful part of Semester at Sea is that the ship is a floating laboratory that moves students from culture to culture as they learn about each country we visit. For me, it was the teaching lab I have always dreamed of: a way of taking students to see the global theatre and performance that we study in class live, in person, on stage, in the country of its origin. All of my courses involve international content, worldviews, and frameworks. But no matter how hard I try to bring these traditions into the class and replicate what they might be like, there is simply no substitute for seeing the exquisite life-like quality of bunraku puppets in Osaka at the National Bunraku Theatre. Or wading knee deep into a pool of water while manipulating rod puppets in Ho Chi Minh City. Or spending an evening watching kathakali performers don their highly symbolic make up before telling a mythic story with their eyes. Or watching a marionette emerge as it is carved from a block of teak and comes to life at the skilled hands of the Htwe puppeteer family in Yangon, Myanmar.

My SAS students got to learn about kabuki in class and then go and see a live performance featuring the living legend, Bando Tomasaburo, playing the onnagata roles. They made music using traditional Vietnamese instruments at the Soul Academy in Saigon. And my Film and Social Change class got to learn about the impacts of rising sea levels on island nations from climate change expert Dr. Chip Fletcher at the University of Hawaii Manoa and pair his lecture with watching Steven Fletcher’s documentary Before the Flood. This type of embodied, site-specific education was inspiring for me to teach and inspiring for my students to learn. It is a model I have used in my study abroad course, Arts and Culture in South Africa, and hope to use in future courses. 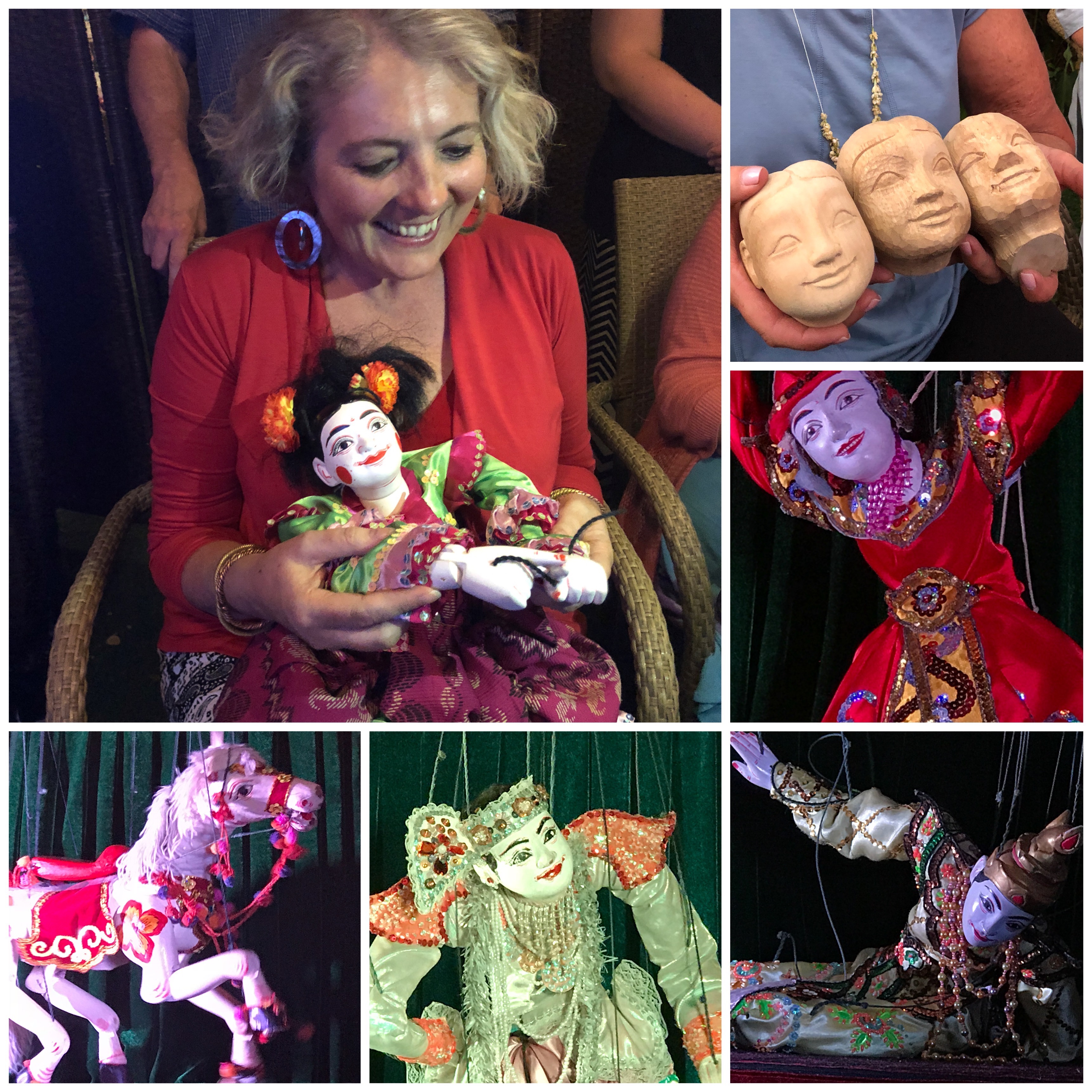 My expertise – and the work we are doing in our department – was also vital to the shipboard community. I was a go-to resource for the arts in a predominantly STEM- and business-focused cohort, giving several Evening Seminars on performing arts in all the countries we visited (and especially, South Africa, my home country and expertise) and introducing non-majors to the potentials of theatre. As well, there were several times when my experience as a white ally and anti-racist educator was necessary on board the ship. For example, students sought me out and I gave several lectures to the entire shipboard community that addressed the ways in which Africa has historically been framed as a single monolithic fantasy of doom and gloom and continues to be reduced to stereotype in the contemporary media. I shared the counter-narrative voices of many African artists, and demonstrated how to reimagine Africans as performing agency in their own right. This as our ship rounded the tip of Africa and docked in Cape Town.I proudly represented UMass on the ship and in every community we visited. I lead Field Classes on climate change in Hawaii, on kabuki in Japan; and water puppetry in Vietnam and marionettes in Myanmar. I also served as Faculty Liaison for in-port trips in China (where we saw Chinese Opera); to the Mekong Delta in Vietnam (where we saw Bat Ho opera); to study mindfulness and meditation at a Buddhist monastery in Myanmar; to the Land of Indian rubber in Kerala and to the Kathakali Center in Cochin. We volunteered at the Semanhyiya School in Senase in Ghana and lived with Berber families during a homestay week in the Atlas Mountains in Morocco. On each of these trips, I facilitated conversations with the students about global citizenship, the spirit and practice of ubuntu, how to be ethical visitors in other spaces, seeing the world from the Global South, and the power of theater as a universal form of human communication and meaning-making.During my journey, I was honored when my book – Magnet Theatre: Three Decades of Making Space – won the Hiddingh-Currie national book award in South Africa. (See above)

And at the end of my journey, I finally got to see Hamilton: The Musical in London, which I used as the source text for my Intro to Theatre class and which became the unofficial soundtrack for the voyage, as students hummed and sang the lyrics from my class across the decks of the ship. After this amazing voyage, the musical’s carpe diem message of “not throwing away your shot,” was not lost on me. Everyone should travel, ideally abroad but locally as well, and study the world. For, as I tell all my students, when you look beyond the horizon of your own belly button, you discover other cultures, other worldviews, and other ways of life. You are asked to encounter difference and break bread with strangers. You look another person in the eye and listen to their stories, to what matters to them. You get to practice radical empathy, listening to – and for – the voice of others. And in doing so, you find not only their humanity, but your own. For, as William James wrote, “We are like islands in the sea, separate on the surface but connected in the deep.”