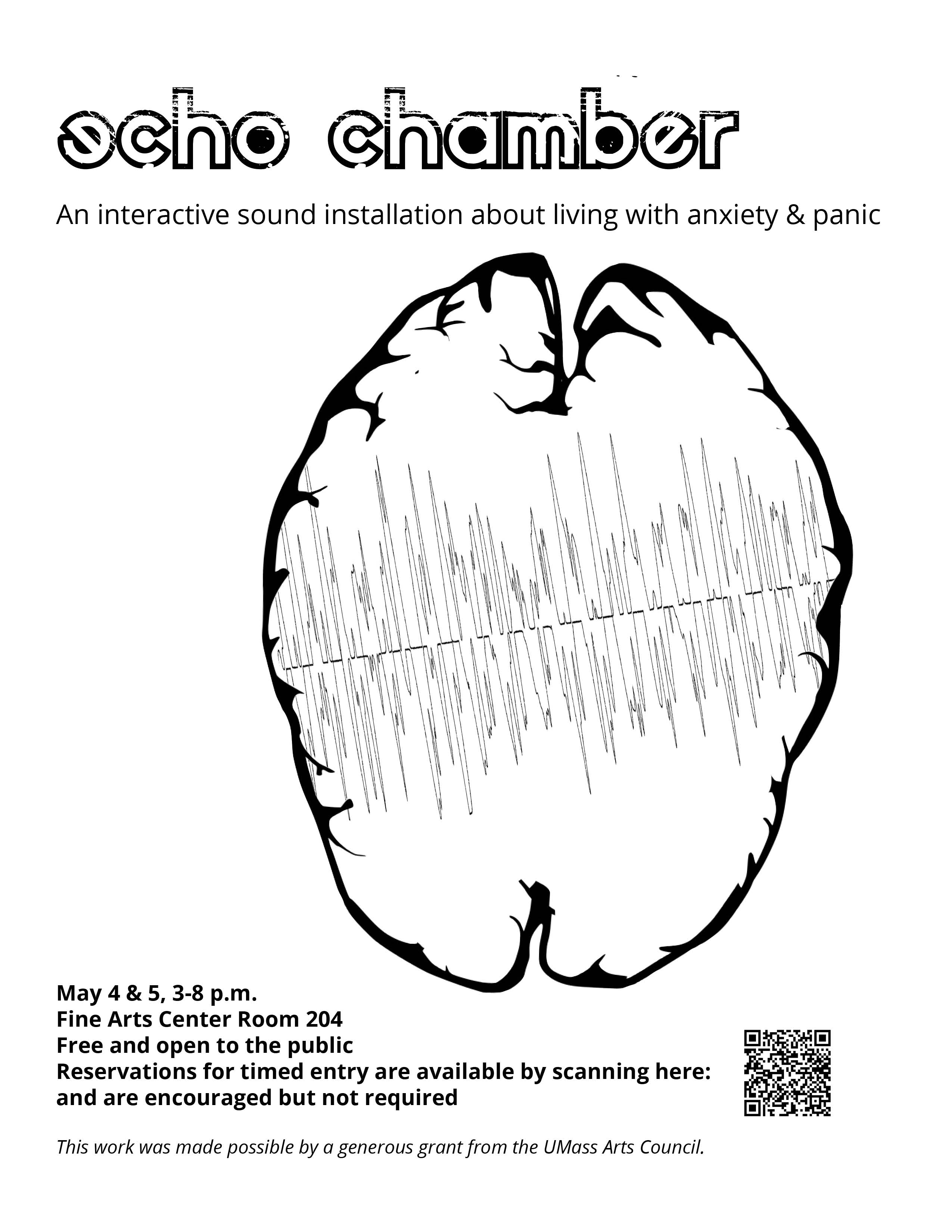 UMass Theater senior Alexander Blaustein has long been involved with theater and has a long-standing interest in technology, but it wasn’t until he discovered sound design in his second semester at UMass that he found the right medium to combine his interests.

“Sound is something you feel, as much as you hear it,” he said. “It’s not just something that’s there in the background. Sound can change the way a room feels.”

On May 4 and 5 from 3-8 p.m. in Fine Arts Center Room 204, Blaustein, who has long experienced anxiety, panic, and depression, is combining his sound design and technology skills to mount a sound installation called Echo Chamber, an aural interpretation of what it’s like to live with these conditions.

“I don’t want to claim to speak for anybody else’s experience. But I hope people who don’t experience anxiety and panic will have some understanding of how the mind and body can feel in these states of distress,” he said, explaining his goals for the piece.

Blaustein said he stumbled into Sound Design Professor Amy Altadonna’s Sound Design I class in his second semester at UMass. The timing was fortuitous: that semester, it happened to run concurrently with Directing II, and sound design students were offered a chance to try designing for one of the directing pieces.

“I ended up doing it, and I had a blast,” Blaustein said, and from there, “the opportunities kept presenting themselves.”

He praised Altadonna for her mentorship. “Throughout all of the projects I’ve worked on here, she has helped me train my ear toward what works in theater,” he said.

He’s designed two mainstage shows: the 1920s-era Harlem Renaissance play, Infants of the Spring, and Maria Irene Fornes’ vision of economic apocalypse, What of the Night? The two works were quite different, but Blaustein approached both with the same straightforward question: “What does the show need?”

In the case of Infants, Blaustein knew jazz was important to set the tone for the era, so he worked with playwright-director Ifa Bayeza and local jazz expert Glenn Siegel to locate the right songs to underscore the play’s themes.

In What of the Night?, meanwhile, he was intrigued by the way the set design offered a stripped-down environment. “The structures undergirding society are visible, and I wanted content that sounded like the space made me feel,” he said. His design involved taking existing tracks and “removing elements that add warmth or depth and leaving the skeleton.”

Blaustein, who is a super-senior this year, knew that he wanted to do his Commonwealth Honors College Honors Project on sound design and technology. Years ago, he had learned about a unique opera, Death and the Powers, which was produced in concert with MIT’s Media Lab and incorporated robotic mechanicals and as well as digital sound with traditional voice and instruments. He wanted to see if he could meld tech and sound “without MIT money.”

His idea was to use technology that is accessible and relatively inexpensive but isn’t in widespread use in theater. Raspberry Pi and Arduino are different types of inexpensive, highly flexible computers that are easy to program and to connect to things like switches and sensors. Max/MSP is a programming language that can be used for sound, and it’s what he’s using to tie the whole installation together. Blaustein evaluates his coding level at that of a skilled hobbyist, so he has spent considerable time teaching himself these applications, augmented his sound design skills with a class in coding and a music theory course, and assembled an advisory team that included Altadonna, Professor of Dramaturg Priscilla Page and Computer Science Professor William Verts.

As an example of the sort of thing visitors will encounter in the space, Blaustein is building sensors that respond to audience motion that will set off sharp or startling sound cues in the space. “It represents the idea that these kinds of anxiety-provoking thoughts can sometimes seem like they come from nowhere,” he said.

There will also be sound elements that will react to people but don’t necessarily always respond predictably — illustrating the idea that sometimes, even tried-and-true techniques for coping with anxiety and panic might not work. At the same time, he is also working on incorporating elements that react to people as they strive for stillness by dropping sounds to a calming level, symbolic of the knowledge he holds onto that anxiety and panic do eventually pass.

Blaustein’s installation won’t be a narrative, nor is it intended to be strictly autobiographical, but it’s intended to offer a window into conditions that are very much a part of his life. “Dealing with anxiety is really difficult,” he said. “I hope I can communicate to people who do not have anxiety disorders or panic attacks that it is not simple to live with these conditions. I also want to say to people who do have these conditions that it is difficult, but not impossible, to get to that place of ‘relief and hope’.”

Echo Chamber is presented May 3, 5-9 p.m. and May 5, 11-8, in Fine Arts Center Room 204 at UMass, and is free and open to the community. You can sign up for a timed entry slot by filling out this Google Form (reservations are encouraged but not required).