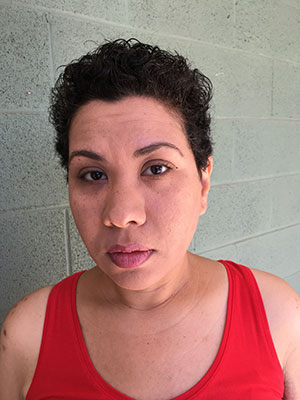 When the Princess Grace Foundation announced its awards for “emerging theater, dance and film artists” this summer, the rest of the world probably noticed Hamilton star Leslie Odom Jr. getting top billing among the honorees, but we at UMass Theater were even more thrilled to see another name on the list: Dawn Monique Williams, who graduated with a directing MFA in 2011.

Williams is the recipient of the Princess Grace Theater Fellowship, which will fund her work directing Merry Wives of Windsor for the Oregon Shakespeare Festival in June 2017. She’ll be celebrated for her award at a gala this month in New York. Williams couldn’t resist the Hamilton wordplay: “I hope (Odom will) be there so then I can be in the room where it happens!”

More seriously, she said that the award is intended to support a “significant step forward in my career.”

Williams is a passionate advocate for “radical inclusion,” the idea that there is room for what might broadly be termed “non-traditional” casting of classical works as well as plays from underrepresented voices in theater. Accordingly, her production’s cast features actors of color, one deaf and signing actor, and cross-gender casting of some roles.

“A huge part of me being at OSF in the first place has a lot to do with my particular mission towards radical inclusion; Bill Rauch, the artistic director, and I are very simpatico on that particular issue,” Williams said.

The production and the fellowship that’s funding it are two steps that seem natural for Williams to take at OSF.

Although she’s a West Coaster, when she graduated from UMass in 2011, Williams stayed in the area for a year to work on a Drama League Directing Fellowship; after that ended, however, she was at loose ends. Eventually, she learned about OSF’s FAIR program, which supports interns, apprentices and fellows learning the craft of theater; the program is intended to support people who have an interest in large-scale classical theater. OSF offers one directing fellowship per season to an early-career director, and 2013, Williams became the Killian Directing Fellow. She assisted on two shows, one of them a production of Cymbeline with Rauch.

“I knew right away when I got to OSF that it was where I wanted to be; it felt like the right theater home for me,” she said.

OSF, she said, is the largest rotating repertory theater in the US, and one of the largest regional theaters in the US overall. The company produces a four-Shakespeare season, and then it also has the American Revolutions commissioning program (out of which have come plays like Lynn Nottage’s Sweat).

“For me that models best practices, where you’re putting these classical plays in conversation with contemporary plays, and living writers,” said Williams, “and an artistic director who so fundamentally believes in inclusion and a diverse spectrum of voices and artists working on pieces together. So for me it was just like hitting the lotto. It was all the things that are aesthetically appealing to me, all the things that I value … happening in southern rural Oregon.”

“As soon as I started I was already panicked about it coming to an end,” Williams said, but as she puzzled over how to extend her relationship with the company, Theatre Communication Group released their applications for their leadership U program, which also funds theater artists building their careers. She brought the idea to Rauch, and they successfully applied. Williams spent 2014 through 2016 working with Rauch as his apprentice, serving as associate director on 3 shows, worked on casting, going to board meetings, and doing a sort of artistic director-in-training program.

She had already been hired to direct Merry Wives when the Princess Grace award came up. The fellowship is one an artist must apply for in conjunction with a host theater, and OSF approached her about doing so on this production. (In an aside, she noted that her application included a discussion of the Twelfth Night she did at UMass Theater!)

The production is set for the 1200-seat Elizabethan theater that is the festival’s mainstage. Williams said she is planning on “leaning into the Elizabethan façade and embracing that it was there.” The costumes will have an Elizabethan silhouette but will play with atypical fabrics, and the score will sneak in 1980s and 1990s pop songs. (See the video below for a longer discussion of her ideas for Merry Wives.)

Asked what comes next, Williams said she wasn’t sure; she hasn’t booked her next project yet. But there, too, the Princess Grace Foundation is a valuable connection. Once they receive the award once, she said, artists gain access to a whole additional tier of funding so that they can work on other projects. “They invest in the long term success of someone’s career," said Williams.

In fact, fellowships are something she encourages directors to look into. She noted that all of her cohort at UMass Theater are still directing, “but that looks very different for each of us.”

Some have formed companies or self-produced projects, while her journey has been to seek out mentorships within bigger organizations.

“Assisting might feel like the slow climb, … but I’ve really come to value the relationships I’ve been able to form with artistic directors,” she said.

Williams was interviewed on OSF's Youtube channels about her plans for Merry Wives of Windsor. Watch the interview below.