On October 8, 2020, Professor of Piano Nadine Shank passed away at age 65. Nadine was on leave from her duties at UMass following her May diagnosis with sporadic Creutzfeldt-Jakob Disease, a rare and incurable form of rapidly progressive dementia.

Department of Music & Dance Chair Salvatore Macchia commented, “Nadine was my friend and colleague for forty years, and we performed together in numerous chamber and orchestral concerts. Nadine premiered a number of my compositions and recorded two of them - one with our former colleague, hornist Laura Klock, and the other with our former saxophone professor, Lynn Klock. She was beloved by her students, admired and respected by her colleagues, and dedicated to her role as teacher, mentor, and performer. Nadine was generous in every way to her students, her colleagues, and the department. She played numerous concerts with our undergraduate and graduate wind players; for many of them, this experience was a high point of their UMass career.  Nadine’s loss is a great blow to the UMass Department of Music and Dance. She will be sorely missed, and we will never fill the void she has left.”

A native of Ohio, Nadine earned her bachelor’s degree from Oberlin Conservatory of Music and her master’s degree in piano performance from the University of Indiana. Her primary teachers included Menahem Pressler, Karen Shaw, Sanford Margolis and John Wustman. Nadine came to UMass in 1979, when she was hired by Charles Bestor to lead the Department of Music and Dance’s piano accompanying program. During her more than forty years at UMass, she establishing a thriving and dynamic Collaborative Piano studio and helped to institute the master’s in collaborative piano degree program, which has drawn top piano students to UMass. Her mentorship of the skills and dedication required to develop well-rounded pianists kept the program on the cutting edge of her field throughout her tenure.

With her talents as both a performer and educator, Nadine served as a model of the versatility that she cultivated in her students. Her colleague and friend, retired Professor of Piano Estela Olevsky, called Nadine “a complete pianist, and a great role model for the students in her program, demonstrating how they can succeed by expanding their skills and becoming well-rounded pianists, collaborators, and teachers.”  Nadine enjoyed a highly successful and wide-ranging career outside of UMass, performing at such prestigious venues as the Phillips Collection in Washington, D.C., Jordan Hall in Boston; and Weill Recital Hall, Merkin Hall, and the 92nd Street Y in New York City. In particular, she counted her recital tours with renowned Violin Professor Emeritus (and Wieniawski Violin Competition winner) Charles Treger among her proudest moments as a performer.

Nadine also performed and recorded with a wide range of artists and ensembles, including a longstanding collaboration with retired Professor of Saxophone Lynn Klock, as well as Professor Jonathan Hulting-Cohen, Klock’s successor.  She served for thirty-five years as principal pianist with the Springfield Symphony Orchestra, and her joyful “Nadine and Friends” recitals at UMass have been a mainstay of recent spring semesters. Nadine released 18 recordings on a variety of labels, including CRI, Gaspari, MRS, New World, Spectrum, and YAL, as well as numerous "Play-Along" CDs of saxophone and clarinet literature for Open Loop. 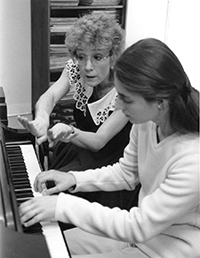 With all of her many professional accolades, she commented recently that she took the most pride in mentoring the many piano students she has taught over the years, music majors and minors who have gone on to careers in music and a wide range of other professions. Her Collaborative Piano program, and Nadine personally, have played a major role in the success of hundreds of music students and the department as a whole. In reflecting on his experience as a member of her studio, former student Anthony Ferreira commented, “I credit Nadine for reigniting my love for piano.”

Nadine was a predictable presence either on the stage or in the audience at countless music, dance and theater productions. She attended performances of the UMass orchestras, Wind Ensemble and choruses, and student and faculty recitals even of non-pianists; unless Nadine had a rehearsal or concert herself, she'd be there. One faculty member remarked, "Nadine played in and attended more concerts in a year than most of us do in a lifetime."

Nadine’s family is planning a public celebration of her life with both musical and spoken tributes after COVID restrictions are lifted. Donations may be made to the Nadine E. Shank Piano Endowment Fund at the UMass Amherst Department of Music and Dance website, www.umass.edu/music/give-music.

To read the full Daily Hampshire Gazette "Legacy" obituary or to leave a remembrance of Nadine, click here.