AMHERST (MA) – Later this month, members of the renowned Limón Dance Company will perform alongside students from UMass and Five College Dance in a special event titled Reflect/Respond: A Limón Dance Legacy Concert.  The performance, which takes place on Friday, January 25 at 7:30 PM in the Fine Arts Center Concert Hall, will feature two Limón masterworks along with a world premiere by acclaimed choreographer David Dorfman. The concert is directed by Associate Professor of Dance Paul Dennis, who is himself a former member of the Limón Dance Company, and presented by the UMass Amherst Department of Music and Dance. 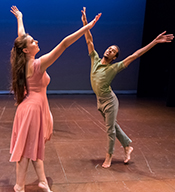 At the concert, Company members will present “The Exiles,” a classic duet created by José Limón in 1950. Company members will then join students from UMass and Five College Dance in performing one of Limón’s most enduring masterworks, “A Choreographic Offering,” which he created in 1964 as a tribute to his teacher and mentor, Doris Humphrey. Paul Dennis describes the work as “a seamless marriage of movement and music. (It) is built upon Humphrey’s own choreographic motifs, but also stands as a supreme example of the Limón technique, which is divided among various physical extremes: fall and recovery, rebound, weight, suspension, succession and isolation.”

“A Choreographic Offering” also serves as the point of departure for a new work by David Dorfman titled “Picture This,” which will be performed by students from UMass and Five College Dance. Mr. Dorfman is a Guggenheim Fellow whose works have been commissioned by London’s Bedlam Dance Company, d9 Dance Collective in Seattle, and Prince Music Theater in Philadelphia. “Picture This” was created as a reflection on Limón’s indelible impact on the dance world as well as a response to that legacy using modern dance techniques.

Ticket prices are $20 for the general public, $5 for students, seniors & UMass Amherst employees, and free for UMass students. Tickets may be purchased at the Fine Arts Center Box Office, by phone at 413-545-2511, or online at www.fineartscenter.com/musicanddance.

Free and secure parking is available in nearby University lot 71 off Massachusetts Avenue and lot 62 via Thatcher Way or Stockbridge Road.  Visit the Fine Arts Center website for more information or refer to the UMass interactive parking map.

Support for Reflect/Respond was provided by the UMass Amherst College of Humanities & Fine Arts, Department of Music & Dance, UMass Arts Council, and donors to the Reflect/Respond Project MinuteFund.