The UMass Department of Music & Dance, in cooperation with Creation Global and Assistant Professor of Music Theory Miriam Piilonen, is co-sponsoring an online workshop series entitled Chicago Footworkology Music Edition. The event will take place via Zoom videoconferencing on Saturday, April 10th and Sunday, April 11th, 2021, and will feature legendary producers DJ Clent, RP Boo, and Traxman, giving music producers and dancers from around the world the chance to learn online about Chicago Footwork music from cultural primary sources. 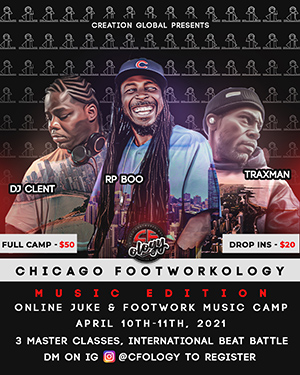 Chicago Footworkology Music Edition will include three online masterclasses in Chicago Footwork music production, Chicago music history and culture, and the connection between the city’s music and dance forms. The classes will include Fundamentals of Footwork Production with DJ Clent, Exploration of Chicago Dance Music with Traxman, and the Connection of Chicago Music and Dance with RP Boo. The full camp cost is $50, and a drop in is $20 per class – registration is at http://bit.ly/cfologymusic. Full and partial scholarships are available for artists in need of financial assistance – the link to apply for scholarships is http://bit.ly/cfologymusicaid.

In addition to the three workshops, there will be an online international beat battle called Werk The Beat, which will further bring footwork music artists to a world-wide audience and connect global communities. The event is open to the public and free to spectate.

The cost to enter the battle is free for all full camp participants, and only $5 USD for all other artists. If an artist would like to enter the beat battle, one may simply direct message @cfology on instagram or email the team at chicagofootworkology@gmail.com. Entrants should send 30 seconds of a single footwork track from the creators. Battle entries are due by Thursday, April 8th at 8PM PST; the top 16 will be chosen by RP Boo, DJ Clent, and Traxman. The judges of the “Werk The Beat” battle live event will be all audience members present, as our team will be polling the audience after each head to head battle. There will also be a cash prize for the winner.

In the past decade, artists all over the world have fallen in love with Chicago Footwork music and dance. Unbeknownst to most, Chicago Footwork music production is nevertheless widely influential to DJs and producers across the world, with the late DJ Rashad as perhaps the most well-known among international musicians. Despite growing international interest, however, it remains relatively underground within the U.S. and abroad.

Chicago Footwork musicians and dancers have been working hard to share the culture globally and domestically. In 2005 Missy Elliot brought the dance style to new audiences when she asked the Chicago Footwork Crew “Full Effect” to dance in her music video to the track ”Lose Control”. Some years later, Planet Mu started supporting acts like DJ Rashad and DJ Nate into the international music discussion with DJ Spinn and DJ Rashad playing Pitchfork Festival in 2011, 2013, and 2014. Simultaneously, Prince Jron (HAVOC) and King Charles (Creation) performed alongside Madonna on her Sticky and Sweet Tour 2008. Both dancers have continued to teach classes around the world for over a decade, and slowly but surely Chicago Footwork became a global phenomenon. In 2014 the community lost its most influential ambassador: DJ Rashad. Since then, artists such as King Charles with his crew Creation Global and collectives such as Teklife, Beatdown House, TEKK DJZ, and Juke Bounce Werk have worked hard to continue living and spreading the culture.

The current pandemic has been a difficult time for many artists, but also one of opportunities. In June 2020, Creation Global organized the first ever online Chicago Footwork dance camp, Chicago Footworkology. The camp premiered with 250+ participants from 25 different countries. CFology Music Camp is a continuation of Creation Global’s efforts to build an international platform for Chicago Footwork artists, to connect them with other community members across the globe, and to create a multicultural artistic movement.