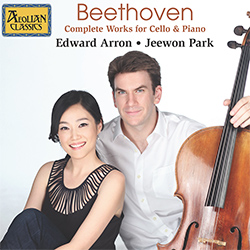 Earlier this year, UMass faculty cellist Edward Arron and pianist Jeewon Park released a recording of Beethoven’s Complete Works for Cello and Piano on the Aeolian Classics label. The two-disc CD was recorded, engineered and mastered by Adam Abeshouse, a past Grammy-winner of Classical Producer of the Year, and Best Classical Instrumental Solo Performance (Producer/Engineer). Prior to its release, the recording received the Samuel Sanders Collaborative Artists’ Award from the Classical Recording Foundation.

“Beethoven’s five sonatas and three sets of variations for cello and piano represent the arc of Beethoven’s compositional career, and are arguably the most significant contribution to the cello/piano duo repertory by a single composer,” according to Arron. “This recording is a document of our first 20 years of work together on these pieces.”

In the liner notes for the CD, Amherst College Professor of Music Emerita, Jenny Kallick, writes: “The partnership of Edward Arron and Jeewon Park delivers a performance of extraordinary originality and explosive imagination. Their attention to details in the score and their sensitive reading of those details, both overt and hidden, has resulted in interpretations of the greatest integrity. Each of these artists touches us with a moving, distinctive individual voice. And still, it is their collaborative energy that imbues these performances with their stunning expressive power.”

In addition to the Aeolian Classics CD release, the recording is also available for streaming on Spotify, Apple Music and Amazon Music.

This recording was made possible in part by a Faculty Research Grant from the University of Massachusetts Amherst. Financial support was also provided by the UMass Amherst Office of the Vice Chancellor for Research and Engagement.