AMHERST, Mass. – Felipe Salles, associate professor of jazz studies, composition and saxophone at the University of Massachusetts Amherst, has been selected to receive a John Simon Guggenheim Memorial Foundation Fellowship.

Salles is one of 173 scholars, artists and scientists in the United States and Canada to be chosen from a group of almost 3,000 applicants on the basis of “prior achievement and exceptional promise,” according to the foundation.

He plans to use the award to create a new multi-movement work for jazz orchestra entitled “Dreamers: The New Immigrant Experience,” inspired by the plight of those brought to this country as children and are currently protected from deportation under the Deferred Action for Childhood Arrivals (DACA). 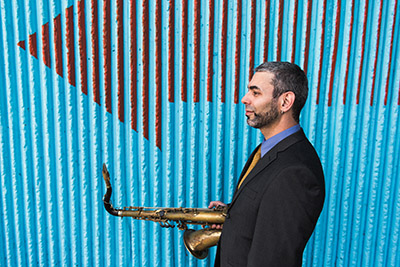 “This award is a huge endorsement of my artistic vision and of the new directions I want to take my music,” said Salles. “Without this kind of support, a multi-media project for video and large jazz ensemble like mine could not be possible. Words cannot express how honored and grateful I am to receive this fellowship."

Foundation president Edward Hirsch said, “Each year since 1925, the Guggenheim Foundation has bet everything on the individual, and we’re thilled to continue to do so with this wonderfully talented and diverse group.”

The new work, which will feature a documentary video and still images, will use speech as its main source of musical material to represent the language acquisition that the so-called DREAMers have experienced as part of their cultural adaptation. Salles plans to use seven languages and five dialects in the composition, representing the largest such linguistic groups in the DREAMer community. Every language group represented in the work will serve as a source for phrasing, cadences and melodic and rhythmic patterns.

This year’s Guggenheim fellows, who range in age from 29 to 80, represent 49 disciplines, 69 academic institutions, 31 states and three Canadian provinces.

Since 1925, the Guggenheim Foundation has granted more than $360 million in fellowships to more than 18,000 individuals, among whom are scores of Nobel laureates and poets laureate, as well as winners of Pulitzer Prizes, Fields Medals and other internationally recognized honors.

Felipe Salles bio:
A native of São Paulo, Brazil, Salles is a saxophonist and composer whose work brings together musical influences from his homeland, the jazz idiom, as well as the contemporary classical idiom. He has had works performed by the Metropole Orchestra, Cayuga Chamber Orchestra, Helsinki Philharmonic Violas, Meta4 String Quartet, Arno Bornkamp, Manhattan School of Music Jazz Orchestra, Manhattan School of Music Jazz Philharmonic Orchestra, New England Conservatory Jazz Orchestra and Wind Ensemble, and the UMass Amherst Wind Ensemble, among others.

Salles’ awards include a 2015-16 National Association of Latino Arts and Cultures Fund for the Arts grant, a 2009-10 French American Jazz Exchange grant, and a 2005-06 Chamber Music America New Works: Creation and Presentation Grant Program, sponsored by the Doris Duke Charitable Foundation. He was also awarded first place in the 2001 Concurso SGAE de Jazz “TETE MONTOLIU” for his composition “The Return of The Chromo Sapiens.”

An active musician in the U.S. since 1995, Salles has worked and recorded with prominent jazz artists including Randy Brecker, David Liebman, Lionel Loueke, Jerry Bergonzi, Chico Pinheiro, Jovino Santos Neto, Oscar Stagnaro, Duduka Da Fonseca, Maucha Adnet, Tony Lujan, Luciana Souza, and Bob Moses. He has toured extensively in Europe, North and South America, India and Australia, as a sideman and as leader of his own group. 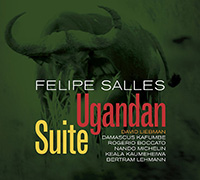 His sixth album, Ugandan Suite (Tapestry, 2014), was described by jazz guitarist extraordinaire Lionel Loueke as follows: “This is one of the best progressive works I have heard in a long time. What a great blend of classical, African and Jazz music.” It also made DownBeat’s best albums of the year list in 2014.

Felipe’s seventh release, the CD Varanda (Tapestry, 2017), by the The Reunion Project, a Brazilian jazz collective, has received critical acclaim, including a 4.5 stars review on the July 2017 issue of DownBeat Magazine.

2018 marks the release of his first large jazz ensemble recording, The Lullaby Project and Other Works for Large Jazz Ensemble, which was composed for and recorded by his own Interconnections Ensemble.