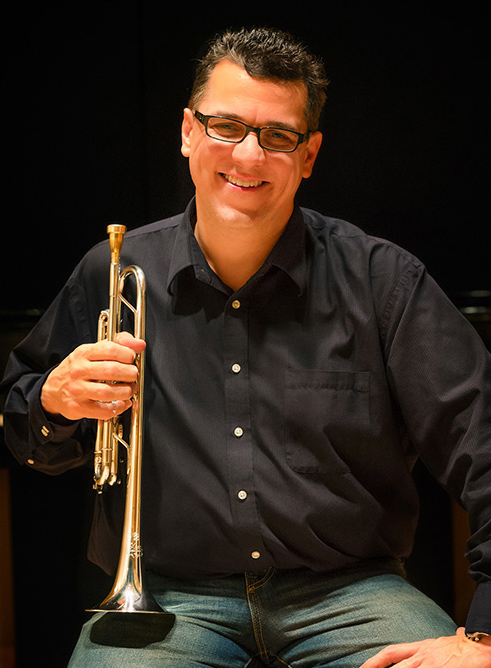 On Saturday, December 11, Professor Eric Berlin and the Albany Symphony performed Heimdall’s Trumpet by late Pulitzer Prize-winning composer Christopher Rouse, which will also be recorded for a later release on Naxos Records. The piece was first performed in 2012 as a commission by the Chicago Symphony Orchestra for its Principal Trumpet, Christopher Martin, but has yet to be recorded until now.

Berlin first encountered Rouse's music about two decades ago, and recalls being "blown away" by the fearlessness with which the composer embraced the extremes available from an orchestra and soloist. In particular, Rouse's 1999 piano concerto Seeing and the 1991 Pulitzer Prize-winning Trombone Concerto, both commissioned by the New York Philharmonic, made a huge impact on Berlin as they "explore far reaches of what the instruments can do and the emotional range and impact for an audience to experience."

As Principal Trumpet of the Albany Symphony, Berlin got to know the composer whom he describes as "a kind, gentle and humble spirit from whom one may be surprised to received music of this power." A planned meeting to discuss this work was derailed by the composer's untimely death from cancer in late 2019. Without the ability to meet directly with Rouse, Berlin has spent months preparing and constructing a programmatic structure in order to organize the work.

According to Berlin, "Heimdall's Trumpet is a monumental work which evokes the mysterious world of a lesser known but complex character from Norse mythology. The piece taxes every technique demanded of a trumpeter - with its heroic fanfares, gentle sensuous melodies, expansive lines and manic chase-and-battle music, it showcases the orchestra as well as soloist. Much of the more dramatic music is rather free and somewhat improvisatory, allowing me spontaneous interaction with the orchestra and the energy of the audience."

The new recording is part of a long list of recording projects featuring the ASO and Berlin. Other recent recordings include George Tsontakis' True Colors, which was written specifically for Berlin; the recording on Naxos was one of NPR's Top 10 Classical Recordings of 2017.

The December 11 concert will take place at 7:30 PM in Albany's Palace Theater, and will also be streamed live. For tickets and information, visit https://www.albanysymphony.com/upcomingconcerts/2021/12/11/the-nutcracker. Also, you may listen to an interview with Eric Berlin about the piece and the performance on a podcast of Albany radio station WAMC here.