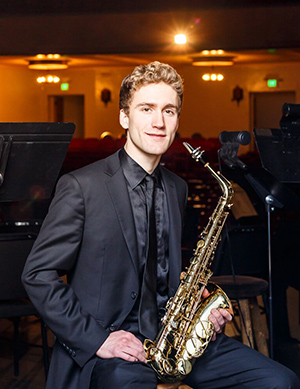 Established in 1986, The Lilly Fellowship is a highly-competitive award program that enables promising junior faculty to cultivate teaching excellence in a special yearlong collaboration.

The fellows attend bi-weekly seminars on teaching pedagogy, develop a new course or substantially redesign an existing one, assess their teaching and their students’ learning through classroom visits, and design a teaching-focused workshop or program to share the benefits of the Lilly Fellowship with colleagues at the department, school-college, or campus-wide level.

Hulting-Cohen has numerous initiatives planned for his fellowship, including a thorough survey of all saxophone pedagogy textbooks to date, a reworking of the saxophone technique workbook that he has compiled, and compiling and analyzing syllabi for his department’s academic courses to more fully integrate shared curricula.

Bio:
Jonathan Hulting-Cohen, Assistant Professor of Saxophone at UMass Amherst, has performed with the Philadelphia Classical Symphony, Adrian Symphony Orchestra (MI), and Sequoia Symphony Orchestra (CA). He presented solo recitals in Strasbourg, France, Mississippi University for Women, and the Edinburgh (Scotland) Fringe Festival, and performed chamber music with David Shifrin at Chamber Music Northwest and under John Adams and David Robertson at Carnegie Hall. With the Admiral Launch Duo, Hulting-Cohen has commissioned and premiered nationwide ten works for harp and saxophone, which are scheduled for release on the duo’s debut album in 2018.

Jonathan Hulting-Cohen earned his BM and MM under Donald Sinta at the University of Michigan and is a Conn-Selmer and D’Addario Woodwinds Artist.