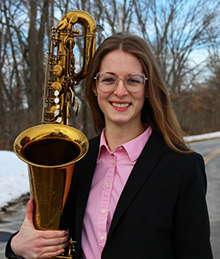 Department of Music & Dance senior Zoe Stinson is one of only eight students to be recognized as a Rising Researcher by the University of Massachusetts. Launched in 2013, the Rising Researcher program recognizes undergraduate students who excel in research, challenge their intellect, and exercise their exceptional creativity in their chosen field.

Read Zoe’s full Rising Researcher profile below – click here to learn more about the program and her fellow awardees.

“Research can be like being on a roller coaster: it has its highs and lows. To be successful at it you have to first figure out where to look and then be persistent.” - Zoe Stinson

When she played her first note on the baritone saxophone, in sixth grade, Zoe Stinson felt her glasses vibrate on her face and was intrigued. She got her own baritone sax in eighth grade and practiced and performed until the instrument became part of her identity.  Now, as a music performance and music education major at UMass Amherst, Zoe has made it her mission to champion the often overlooked baritone sax, known more as an auxiliary member of the saxophone family than an instrument to command center stage.

“It’s always held a special place in my heart,” she says. “Your instrument is your vessel of expression. As I became more educated, the colors that the baritone sax produces and its range fascinated me.”

Drawn to UMass Amherst by the friendly vibe of its music program, Zoe has played the soprano, alto, tenor, and baritone sax in many ensembles, on campus and off. She is a drum major in the UMass Minuteman Marching Band, performs with the Wind Ensemble, and plays in a chamber group. “Any chance to perform, I’m there,” she says. 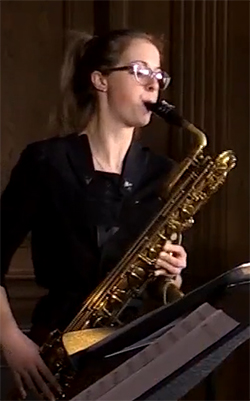 She has stood out in the Music & Dance Department, winning the 2020 UMass Amherst Symphony Orchestra Concerto Competition for soloists. Jonathan Hulting-Cohen, assistant professor of saxophone, says, “Zoe is an exceptional saxophonist whose artistry and concern for the field are exemplary.” Zoe has also been named the department’s Presser Scholar for the 2020-2021 school year.

While preparing for a solo recital she called “Colors: A Showcase of the Baritone Saxophone,” Zoe found herself wishing there were more pieces for her instrument and decided to look for works that might have been buried over time. She started sifting through an index of nearly every piece written for saxophone since its invention in the 1840s.

“My mission is a multipart research plan to explore the colors that the baritone saxophone can produce through my own practice and performance, to build a database of music and links to scores already written for this voice, and to begin a commissioning project for works for the baritone saxophone,” she explains. “The overarching goal of my research is to make music for the solo baritone saxophone more relevant, palatable, and accessible, and through it, show others that this instrument is a valid classical voice.”

Zoe plans to teach music after graduating and to continue her own music education, perhaps with a master’s degree in conducting or performance. “Musicians should never stop learning,” she says. She hopes to perform “Colors” for a live audience after COVID-19 restrictions are lifted and will continue to champion her beloved baritone sax. “This will go way beyond my graduation from UMass,” she says. “It could be a life’s work.”