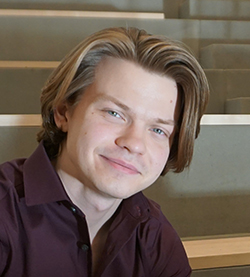 Last month, Ryan Nash, a senior Vocal Performance major in the Department of Music & Dance, took part in the Student Auditions Competition held by the Boston Chapter of the National Association of Teachers of Singing (NATS). Ryan won First Place in his Division (Upper College/Classical), earning a cash prize, professional studio recording time with Boston-based Futura Productions, and a one-year listing in the Boston Singer’s Resource.

The Boston event is a juried competition that is open to high school, collegiate, and graduate vocalists currently studying with instructors who are members of the Boston NATS chapter. Entrants were reviewed by a slate of renowned judges on four recorded works from classical repertoire, all performed from memory, which included an aria and art songs in both English and one other language.

Ryan, who studies with voice professor Jamie-Rose Guarrine, has distinguished himself during his time at UMass by performing the role of Monostatos in UMass Opera’s production of The Magic Flute in February of 2020. He was engaged to perform the role professionally with the Windham Orchestra at the Brattleboro Music Center in March 2020, but the performance was unfortunately cancelled due to COVID-19 outbreak.

Ryan and a number of his fellow UMass vocal students will be competing in the New England Regional competition taking place later this month.