Remembering a "Gentle Giant" on his Centenary 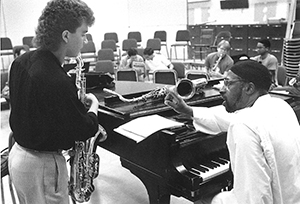 “I also believe one should seek knowledge from the cradle to the grave. With that kind of inquisitiveness, one discovers things that were unknown before.” – Yusef Lateef (1920-2013)

Yusef Lateef, whose 100th birthday anniversary falls on October 9, lived those words to their fullest by engaging a myriad of intellectual, spiritual, and musical pursuits throughout his life. Lateef taught jazz and music education at UMass from 1987 until his retirement in 2002.

By the time of his arrival at UMass, Lateef was an established force in jazz music, having performed with the likes of Dizzy Gillespie and Cannonball Adderly as well as his own ensembles, and composed for a wide range of genres. Besides his mastery of the saxophone and flute, Lateef introduced audiences to a broad spectrum of music from around the globe through his mastery of Middle Eastern and Asian instrumental forms, thereby opening the door what became known as “World Music.” 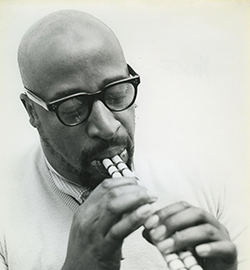 Lateef’s output matched his expansive nature of his talents, with over 75 albums released as either leader or co-leader on BlueNote and his own YAL label. The same year that he arrived at UMass, he released Yusef Lateef's Little Symphony, a four-movement melding of classical and jazz in which he played all of the instruments. The release won the 1988 Grammy for Best New Age Album.

Lateef’s intellectual curiosity also led him to explore many realms outside of music, including writing, philosophy, and painting. He earned a Ph.D. in Education from UMass in 1975 with a dissertation entitled “An Overview of Western and Islamic Education,” and his art was exhibited at the Fine Arts Center and in New York. His many honors included his selection as a Jazz Master by the National Endowment for the Arts in 2010.

A deeply spiritual man, Lateef saw music as a means of transformation for both the individual performer and the listener. That spirituality provided the basis for an entirely new musical form that he developed which he called "autophysiopsychic music – music from one's physical, mental, and spiritual self, and also from the heart.” 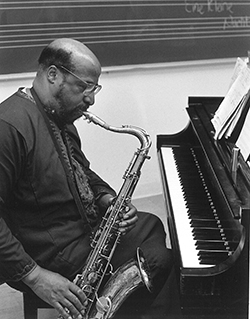 Yusef Lateef’s heart was abundantly evident to all that interacted with him during his fifteen years on the jazz faculty at the Department of Music and Dance. Chair Salvatore Macchia, who taught alongside Lateef at UMass and at the Community Music School of Springfield, fondly remembers Lateef's kindness and commitment to his students. "It was typical of both his great humility and his complete devotion to music that this amazingly accomplished musician was willing to teach young musicians, often virtual beginners, with the same integrity, discipline, and understanding that empowered his teaching of mature professionals," recalled Macchia.

Jeff Holmes, director of the Jazz and African-American Music Studies Program at UMass, commented, "During his time at UMass, Brother Yusef was very open with his students, providing insights into writing, performing, and how to navigate the many intersections between creativity, world history and spirituality.  He was as curious and fulfilled by the most simplistic two notes from a bamboo flute as he was from channeling centuries of oppression into an original work, or giving a jaw-dropping 'tutorial' on tenor hardbop. He was truly one of the all-time greats of any genre." 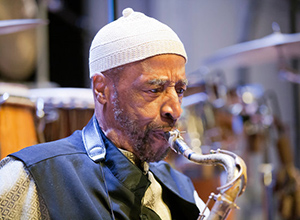 The Department of Music and Dance plans to honor Lateef in performances during the spring 2021 semester. On October 9, the Fine Arts Center launches “Yusef Lateef: A Centenary Celebration,” featuring an appropriately diverse array of performances, discussions, dramatic readings of his fiction, and art exhibitions, along with video tributes by a host of artists, friends, and colleagues like Jeff Holmes. fineartscenter.com/yuseflateef100.

Yusef Lateef's Masara #2, arranged by Jeff Holmes and performed by the UMass Studio Orchestra at the International Association for Jazz Education conference in Toronto, January 2003: