Recording by Felipe Salles Chosen Among Top Jazz Albums for 2019

“DownBeat” magazine, the top publication for “jazz, blues, and beyond,” has included a recent recording by UMass associate professor of music Felipe Salles on their list of 100 top-rated albums for 2019.

“The Lullaby Project and Other Works for Large Ensemble,” which was actually released in late 2018, was inspired by traditional Brazilian lullabies, and featured the debut of the Felipe Salles Interconnections Ensemble, an 18-piece jazz orchestra that combines Brazilian, Latin-American and classical influences. 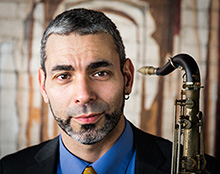 The recording received a four-star rating from “DownBeat” magazine, while “JAZZ’N’MORE” lauded it as “animated and multilayered” and “All About Jazz” described it as “profound and picturesque.”

Salles received a prestigious Guggenheim Fellowship for his most recent project “The New Immigrant Experience,” which had its world-premiere at UMass Amherst’s Old Chapel in April, 2019. A recording and DVD of the project is set for release in March of 2020.