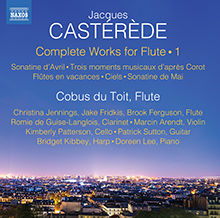 UMass Flute Professor Cobus du Toit has released a comprehensive series of recordings of all the flute chamber works by 20th century French composer Jacques Castérède (1926-2014), on Naxos Records. The final of three CDs is due out on June 26, 2020; the two earlier CDs were released in October 2019 and January 2020. Jacques Castérède: Complete Works for Flute was recorded in late 2017 at the Robert and Judi Newman Center’s Hamilton Hall on the University of Denver campus, a space known for its impeccable acoustics. 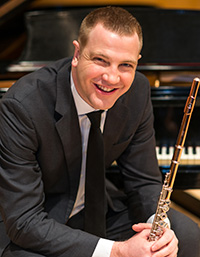 This is the first time that Castérède’s flute catalogue has been recorded in its entirety, and also the first recording project of note dedicated solely to his music. Castérède was one of many composers who refused to abandon tonality and traditional forms amid the stormy avant-garde of the 20th century. A teacher of composition at the Paris Conservatory for many years, and with musical roots in the early 20th century styles of neo-Classicism and Les Six, he composed in almost every genre, including a large catalog of chamber works.

South African native Cobus du Toit has performed in Russia, Taiwan, Japan, Germany, France, Australia and, as a concerto soloist, has performed with orchestras around the globe. His recent project, #WeBringFlowers, which was funded by New Music USA, involved the commissioning of six new flute works inspired by the idea of non-violence. 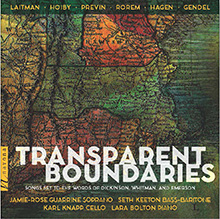 Assistant Professor of Voice Jamie-Rose Guarrine’s debut CD was released on June 12 on PARMA Recordings’ Navona label.  Transparent Boundaries: Songs Set to the Poetry of Dickinson, Whitman, and Emerson is a collaboration with bass-baritone Seth Keeton; the CD also includes Jamie-Rose’s husband, Karl Knapp, on cello and Lara Bolton as well as Scott Gendel on piano. 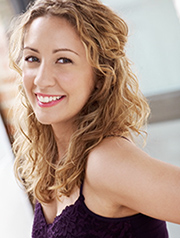 Transparent Boundaries is centered around the works of three of America’s most celebrated poets -  Emily Dickinson, Walt Whitman, and Ralph Waldo Emerson. All three wrote of the boundless optimism and sense of opportunity inspired by our country’s natural beauty, sentiments that helped to usher in a new era of American thought.

The new CD features musical interpretations of a selection of evocative works by these three visionaries. Guarrine, a soprano, and Keeton, a bass-baritone, deftly navigate this series of artsongs, which include settings by Ned Rorem, Lee Hoiby, and André Previn, along with newly commissioned works by Lori Laitman, Daron Hagen, and Scott Gendel. Guarrine and Keeton presented material from the new CD in the spring of 2018 during performances at UMass Amherst, New York’s National Opera Center, the University of Minnesota, and at other colleges across the country.

According to the CD’s liner notes, “Guarrine’s vocal elegance and innate lyricism naturally lend themselves to the vivid simplicity and inward reflection of Dickinson, and Keeton’s lower register captures the direct ruggedness of Whitman. To express the duality of Emerson, the pair come together for a duo to capture the author’s ability to view all things at once in a single picture of beauty.” 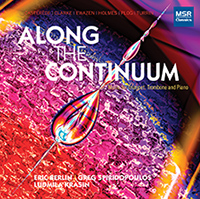 UMass music faculty Eric Berlin (trumpet), Gregory Spiridopoulos (trombone), and Ludmila Krasin (piano) are featured on a new recording on MSR Classics released earlier this spring. The CD, Along the Continuum, centers around the two-decade long professional relationship of Berlin and Spiridopoulos, both of whom are principal players in the Albany Symphony, colleagues in the Majestic Brass and Empire Brass Quintets, and long-time faculty members in the UMass Amherst Department of Music & Dance.

The new CD’s title is taken from Continuum, a work written by fellow faculty member Jeffrey W. Holmes for Berlin, Spiridopoulos, and the UMass Wind Ensemble in 2012. The CD features Holmes’ new arrangement of the piece for trumpet, trombone, and piano, along with other works designed to take the listener “back along the continuum” of Berlin and Spiridopoulos’ shared musical roots. These works include Eric Ewazen’s Double Concerto, Joseph Turrin’s Fandango, Herbert Clarke’s Cousins, and piano reductions of concertinos by Anthony Plog and Jacques Castérède. 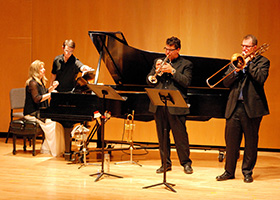 Both Berlin and Spiridopoulos can be heard on numerous recordings by the Albany Symphony, which has a history of commissioning and recording new American works. Notable examples include the 2014 Grammy-winning album, Conjurer, featuring music by John Corigliano, and the 2016 Grammy-nominated album, Kabir Padavali, featuring music by Christopher Rouse. Berlin was soloist on the ASO’s recording True Colors, featuring a commissioned work inspired by his career trajectory composed by George Tsontakis; the CD was one of NPR's Top 10 Classical Recordings of 2017.