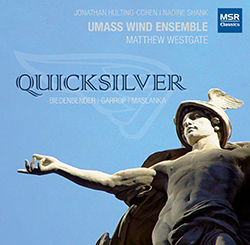 MSR Classics has just released the latest CD by the UMass Wind Ensemble, led by Director of Wind Studies Matthew Westgate. Quicksilver features the world premiere recordings of three works, all of which were commissioned by the Wind Studies program as part of a larger consortium. These include Stacy Garrop’s Quicksilver: Concerto for Alto Saxophone with Wind Ensemble (2017), with UMass saxophone professor Jonathan Hulting-Cohen as soloist; David Biedenbender’s What is Written on the Leaves (2019); and David Maslanka’s Concerto No. 3 (“Do You Know My Name?”) for Piano, Winds and Percussion (2016). The featured soloist on the Maslanka piece is the late UMass faculty pianist Nadine Shank, to whom the CD is dedicated.

Recorded at the UMass Fine Arts Center in 2018 and 2019, the new CD is the Wind Ensemble’s second appearance on the MSR Classics label. In 2014, the group performed Stephen Paulus’ Concerto for Two Trumpets and Band on trumpet professor Eric Berlin’s CD entitled Fantastique. The work subsequently received a 2015 Grammy Nomination for Best Contemporary Classical Composition.

In a more recent development, the Wind Ensemble will be presenting a series of streamed performances over the next seven weekends on the Music & Dance Department’s YouTube Channel. Westgate has titled the series “Standing Together,” a reference to the socially-distant manner in which the students stood outside during the recordings, and the unified approach employed by the entire Music and Dance Department during the pandemic. A different piece will be streamed at 7:30 p.m. on each of seven consecutive Saturdays from December 19 through January 30, with music by composers including Richard Strauss, Arturo Màrquez, Elizabeth Raum, and Kurt Weill. More information on the series can be found at umass.edu/music/events.