Over the past few years, faculty members from the UMass Amherst Department of Music and Dance are finding creative ways to utilize their talents to effect social change on a variety of important issues. 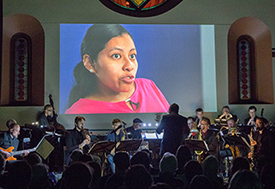 One of the most high-profile examples was Professor Felipe Salles’ Guggenheim-funded work, The New Immigrant Experience, which was released on CD and DVD earlier this year. Inspired by the plight of the “Dreamers” (the almost 700,000 individuals currently protected by the Deferred Action for Childhood Arrivals program), Salles wove personal stories of growing up undocumented into the composition of his 50-minute multimedia work for his jazz big band. The piece had its concert premiere at the historic UMass Old Chapel, and the subsequent recording has received rave reviews, including 4.5 out of 5 stars from DownBeat magazine.

That project follows a number of other faculty-led efforts that have received major acclaim for their artistry and social impact. Associate Professor of Percussion Ayano Kataoka was an ensemble member for the Cuatro Corridos Project, which called attention to the issue of human trafficking. Based on true events, the three-part opera project tells the story of women trapped in a cycle of prostitution and slavery in and around the Mexican border region.  This unprecedented collaboration between internationally acclaimed Mexican and U.S.-based artists was nominated for Best Contemporary Classical Composition at the 2017 Latin Grammy Awards. 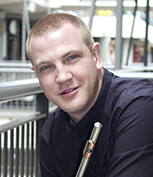 Following the Paris nightclub attacks, Assistant Professor of Flute Cobus du Toit was inspired to create the #WeBringFlowers campaign in 2017 to “confront or revolt against the violence prevalent in modern society.” The project facilitated the commissioning of six flute chamber works, all built around the theme of non-violence. The first commissioned work, Amanda Harberg’s Court Dances, was funded by a consortium of 57 flutists worldwide, and was premiered at the 2017 National Flute Association Convention in Minneapolis. 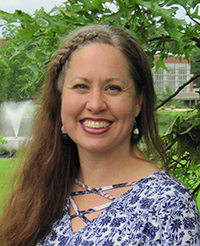 More recently, the department has undertaken a variety of initiatives designed to explore ways that music can act as a spark to ignite positive change and elevate the work of a wider range of composers and choreographers. Over the past year, Assistant Professor of Dance Molly Christie González has been researching the use of the pedagogical approaches of Kathryn Dunham as a means to “decolonize” the modern classroom. Christie González’s work, which is being compiled for publication, has been presented at such prestigious conferences as the National Dance Educators Organization's Annual Conference in Miami, Florida; the “Re:generations” Conference on dance of the African Diaspora at Middlesex University (UK), and at the Collegium for African Diasporic Dance Conference at Duke University.

As part of Professor Paul Dennis’s larger research project on the legacy and work of Women Choreographers in Times of Resistance, he directed an event celebrating the life and legacy of Dr. Pearl Primus, an early champion of the dances of African diasporic traditions. The event took place in early 2020 at New York City's 92Y, and included the premiere of a film about Primus, along with Dennis’s re-staging of Primus’s once-previously performed “Michael Row Your Boat.” Dennis moderated a panel discussion on Primus that included former UMass Dance director and Primus biographer Peggy Schwartz, and Mary Waithe, the last surviving member of Primus’s dance company. 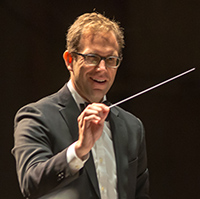 Director of Wind Studies Matthew Westgate been working to infuse the repertoire and coursework for his ensembles to include modern works, particularly those by women and non-white composers, that carry a social message. Examples include Joni Greene’s T’china Lema’an Haifa, a saxophone ensemble piece written during 2006 hostilities in Haifa, Israel, and Frederic Rzewski’s Coming Together, based on a letter by one of the leaders of the Attica prison riots in the 1970’s. Westgate is also charging his Symphony Band students with writing journal entries on how to create a new and more inclusive paradigm for a college wind bands.

As further indication of the department’s commitment to promote dialogue around issues of race and social equality, Violin Professor Elizabeth Chang has organized a speaker series titled Music, Community Engagement & Social Action to explore how artists and educators are seeking to effect social change through music. The series, which began on September 30, includes seven Wednesday evening Zoom sessions and features organizations such as Providence Community MusicWorks, Music Haven, Project STEP and Opus 118 Harlem School of Music, all of which are seeking to bring music to underserved and underrepresented communities across our region.