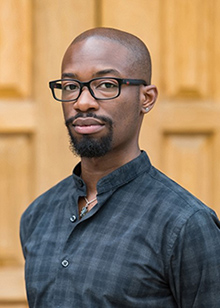 Earlier this semester, Assistant Professor Aston K. McCullough, who directs the Laboratory for the Scientific Study of Dance (LAB:SYNC), was invited to present some of the important research innovations that are in development among current NEA Research Labs at the 2022 National Historically Black Colleges and Universities (HBCU) Week Conference. LAB:SYNC is supported in part by a National Endowment for the Arts (NEA) Research Lab award to the University of Massachusetts Amherst.

The annual conference, which took place on September 20-23, 2022 in Washington D.C., was part of the White House Initiative on Advancing Educational Equity, Excellence, and Economic Opportunity through HBCUs, and was planned with input from the President’s Board of Advisors and the various conference sponsors. Stakeholders, which include federal agencies, private sector companies and philanthropic organizations, provided an overview of successful engagements to improve instruction, degree completion and the understanding of federal policies that shape and support higher education. LAB:SYNC was one of two NEA Research Labs highlighted during the conference; McCullough, along with University of California, Los Angeles distinguished professor Robert Bilder, shared emerging technologies developed at their respective NEA Research Labs that will afford scientists new tools for conducting research on the arts, health, and social/emotional well-being.

During the session titled, “Research, Innovations, and the Arts: NEA Research Labs”, the NEA described the focus of the Research Labs program, which funds transdisciplinary research teams grounded in the social and behavioral sciences, yielding empirical insights about the arts for the benefit of arts and non-arts sectors alike. LAB:SYNC, a biobehavioral research lab, is one of approximately 24 active NEA Research Labs in the U.S. and the nation’s first NEA Research Lab to focus on the relationship between dance exposures and health outcomes in adults. As the highlight of his talk, McCullough presented algorithms and software that he has been developing at LAB:SYNC. These algorithms and software process data from wearable sensors and various types of cameras, allowing users to accurately quantify and characterize dance behavior relative to physiological measures and qualitative features.

Respective technologies developed in both the UMass and UCLA labs have been expressly designed to be available to researchers and educators, with McCullough’s software slated to be available to the research community in the coming weeks. Some of McCullough’s software applications were recently referenced in an article by The MathWorks, Inc., which focused on McCullough’s novel uses of the company’s MATLAB platform when teaching a General Education course at UMass Amherst.

“The LAB:SYNC team is thrilled to share these new software applications, and is eager to continue developing extensions for them following their upcoming launch,” said McCullough.