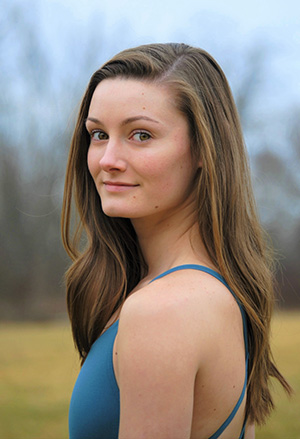 Kelsey Elizabeth Saulnier (BFA Dance '18, pictured) has been selected to represent the University of Massachusetts Amherst Music and Dance Department at the National College Dance Festival to be held on June 7-9, 2018 at the John F. Kennedy Center for the Performing Arts in Washington, D.C.  Kelsey’s solo work Small Memory was selected for inclusion by the 2018 Northeast Conference of the American College Dance Association (ACDA), which lauded the work as “a delicate movement poem, pure in its essence and profound in its performance and simplicity."  Saulnier describes Small Memory as having been inspired “by shared memories, arrival, and departure. Through authentic gesture and poetic nuances, this dance explores a single moment in time, while questioning beginnings inside cyclical cycles.”

Saulnier recently performed alongside fellow UMass dance students and faculty at the 92nd Street Y in New York City on April 14, 2018.  The performance, titled “College is Not a Dry Run,” featured two works by Music & Dance faculty members  - Alyma by Molly Christie González and Last Loop First by Leslie Frye-Maietta - along with Saulnier’s Small Memory and to ascend past numbness… by TheREDprojectNYC’s Johnnie Cruise Mercer.

A resident of Blackstone, MA, Saulnier has been featured in works by Pilobolus Dance Theater, Bill T. Jones, Kinsun Chan, and Bebe Miller.  Last year, she was awarded the Virginia J. Wagner scholarship, granted to a student who has made significant contributions to the productions of the Five College Dance Department.