The latest CD by Felipe Salles, The Lullaby Project and Other Works for Large Ensemble, has been greeted with overwhelmingly positive reviews since its release by Tapestry Records in September 2018. Salles, who is Associate Professor of Jazz & Afro-American Music Studies at UMass Amherst, has recorded seven albums as a leader and one as a co-leader, with the last three released by Tapestry Records. 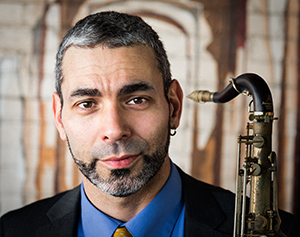 The release marks the debut recording of the Felipe Salles Interconnections Ensemble, an 18-piece jazz orchestra that combines Brazilian, Latin-American, and classical influences. Inspired by traditional Brazilian lullabies, The Lullaby Project is a suite of pieces which are all ‘through-composed’ and feature jazz solos from different members of the various sections. According to Salles, the music was intended to “to create a musical commentary on the dark underlying qualities of lullabies, as well as to illustrate the socially transformative impact (they) have had on generations of children.” The “Other Works” are three tango-inspired pieces, also for large jazz orchestra, titled Odd Tango, Astor Square (honoring Brazilian tango master Astor Piazzolla), and Carla’s Tango.

The CD has received rave reviews from a host of jazz publications and writers, including four stars from the prestigious Downbeat Magazine. Writing for Germany’s Jazz ’N’ More Magazine, Angela Ballhorn lauds the work as “animated and multilayered… a magnificent work on an orchestral niveau.” Jack Bowers in All About Jazz calls the Lullaby Project “profound and picturesque” as well as “well-conceived, well-written and well-performed.” Other favorable reviews came from online journals Step Tempest, Art Music Lounge, Bebop Spoken Here, Bird is the Worm, New York City Jazz Record, Midwest Record, and  Vinylmine (Greece).

Saxophonist, composer and arranger Felipe Salles, a native of São Paulo, Brazil, has been performing and teaching in the U.S. since 1995.  Salles has worked with and/or recorded with artists such as trumpeter Randy Brecker, guitarist Lionel Loueke, vocalist Luciana Souza, and fellow saxophonist David Liebman, among many others. He has been the recipient of numerous grants for composition including becoming a Guggenheim Foundation Composition Fellow in 2018.

Salles is currently working on an ambitious multi-media Guggenheim-funded project titled The New Immigrant Experience, which will combine live music and video projections into a multi-movement suite about conversations with Dreamers (children of immigrants).  The work premieres on Tuesday, April 9 at 7:30pm in the Old Chapel, UMass Amherst.