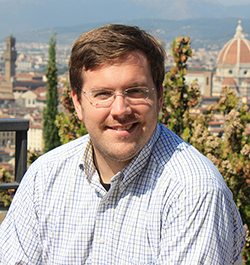 Evan A. MacCarthy, a Five College Visiting Assistant Professor of music history in the UMass Amherst Department of Music and Dance, has been elected President of the New England Chapter of the American Musicological Society for a two-year term. The AMS is the foremost national organization dedicated to expanding the understanding of music and sound through research, teaching, learning, and advocacy.

The New England Chapter of the AMS presently has 150 active members from New England and the Maritime provinces of Canada and (eastern) Quebec. As President, MacCarthy will call and preside over the three annual meetings and work with other officers to supervise the affairs of the Chapter. More information about the organization can be found at http://ams-ne.blogspot.com/2020/12/new-officers-for-ams-ne.html.

MacCarthy’s research focuses on the history of fifteenth-century music and music theory, late medieval chant, German music in the Baroque era, as well as nineteenth-century American music. He presently serves as the Discipline Representative for Music for the Renaissance Society of America (through 2021) and serves on the Council of the American Musicological Society (through 2021) and the Advisory Board of the Sewanee Medieval Colloquium.