Eric Berlin Has New Book of Photography, "Music for the Eyes" 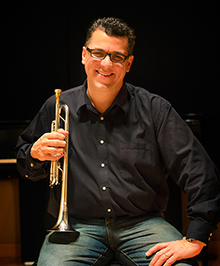 Eric Berlin, professor of trumpet in the Department of Music and Dance, has added photography to an already extensive list of artistic skills.

“I have always snapped photos on my travels, but it was not until I got a hand-me-down digital single-lens reflex (DSLR) that I found a creative outlet through the camera,” Berlin says. “Getting a higher quality image than I could with my small point-and-shoot led me to consider composition and depth of field, among other things.” 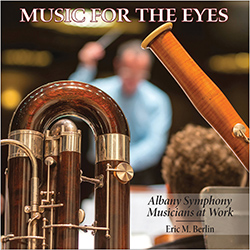 Berlin’s work as a photographer covers everything from nature to the concert halls he performs in. Images Berlin captures of music and dance students at UMass are printed on walls of the hallways in the department of music and dance and are often used in promotional materials for the department, as they capture the energy and passion of the performers in a way that cannot be replicated through word of mouth.

“Musicians rehearse and perform in beautiful venues; our instruments are often incredibly compelling as works of art themselves and there is a joyous energy in musicians at work which is not always apparent from the other side of the invisible wall separating artist from audience,” says Berlin.

Berlin similarly captures images of the Albany Symphony Orchestra. The pictures displayed in the book created “a behind the scenes look at the Albany Symphony Orchestra, which is known worldwide for its mission of commissioning and recording American music of our time,” says Berlin. “I realized that there were historic moments happening almost every week with premiers of new works by the most well-known composers of our time and soloists of the highest caliber.”

An exhibition of 50 of the images was on display from Sept. 7 through Oct. 13 at the Photography Center in Troy, NY. It was then moved to Albany for display at the Symphony's Opening Night Prelude Party prior to the October 19th concert. The photos from the exhibition, as well as a catalog with 30 additional images, was auctioned to benefit the Albany Symphony. A description by Berlin himself can be found on the Albany Symphony's website.

Berlin, who is currently on sabbatical leave, says that staying focused on a performer’s pure artistic vision is difficult while instructing young players on their technique. During his sabbatical leave, he is restoring that focus and vision by preparing a “monumental concerto” called Heimdall’s Trumpet, by Christopher Rouse, to perform with the Albany Symphony Orchestra. Berlin will return to teaching UMass trumpet majors in the fall of 2020.