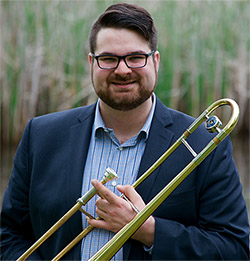 AMHERST (MA) – Trombonist and composer Brian Martin ’19MM has been honored with a Student Music Award from DownBeat Magazine.  Recognized as the top publication devoted to “Jazz, Blues, and Beyond” since its inception in 1934, DownBeat publishes the Student Music Award winners each year in its June issue, following an extensive adjudication process by panels of highly respected jazz artists.

Martin won the award for Outstanding Arrangement for Studio Orchestra (Graduate College category) for his arrangement of George Gershwin’s “I Got Rhythm.” His composition instructor for the project was Felipe Salles; Jeffrey W. Holmes directs the Jazz and African-American Music Studies (JAAMS) program at UMass Amherst. 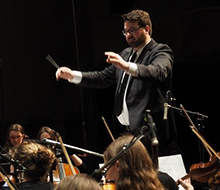 At UMass, Martin was a student in the Jazz Composition and Arranging graduate program from 2017-2019, performed on trombone, and co-directed the UMass Jazz Lab Ensemble. He also received acclaim from the Jazz Education Network, which featured one of his original compositions in the Young Composer Showcase at their 2019 Conference. The inspiration for his award-winning arrangement of Gershwin’s classic song actually came to him as he was packing to leave the conference, and he sketched the arrangement on the flight home.

Since receiving his Master’s, Martin has been working as a Band teacher for Derby Academy in Hingham, Massachusetts, as well as performing around Boston and fulfilling composition commissions for various schools. One of those commissions is from the UMass Wind Ensemble, which will hopefully be able to perform the new work this coming fall.

In earning this award, Martin becomes part of a long line of UMass Music & Dance Department students that have been recognized with DownBeat Student Music Awards over the years. Individual students and ensembles affiliated with the UMass JAAMS program have won awards in virtually every performance and writing category, with over 50 DownBeat awards to date.

The award-winning arrangement of "I Got Rhythm" can be heard on the Media section of Brian Martin's website.