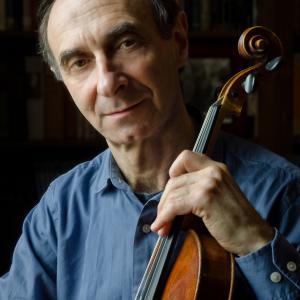 Ronald Gorevic has had a long and distinguished career as a performer and teacher, on both the violin and viola.

As a violist he has been a member of several well known string quartets, spanning over twenty years, and covering most of the quartet repertoire.  He has toured throughout the U.S., Germany, Japan, Korea and Australia, and has also been broadcast on radio stations across the U.S., S.German and S.W.German radio, and the Australian Broadcast network.

As a violinist, Mr. Gorevic has performed recitals in major U.S. cities including New York, Chicago, Cleveland and Atlanta.  He has also performed in London, where he gave the British premieres of pieces by Donald Erb and Ned Rorem.

Mr. Gorevic is a founding member of the Prometheus Piano Quartet, with which he has recorded piano quartets of Saint-Saens and D’Indy for Centaur.  He has also recorded for Koch International and Crystal records. His most recent recording, of Brahms clarinet quintet and trio in Brahms’s own arrangement for viola instead of clarinet is on the Centaur label.

He is currently on the faculties of Smith College, Simons Rock and The Prep department of New England Conservatory of Music teaching both violin and viola.  He has also been on the faculty of the Greenwood Summer Music Camp for the last 23 years, and in the past has held teaching positions at the Cleveland Institute of Music, the University of Akron and Indiana University at South Bend.  In addition to his teaching duties he has an arrangement of the Mendelssohn violin concerto in E Minor for viola and piano, which is available in the US through Sharmusic.com.

He is an active performer on both instruments, and this season that includes performances of the complete Beethoven violin sonatas, and the complete Bach cello suites on the viola.