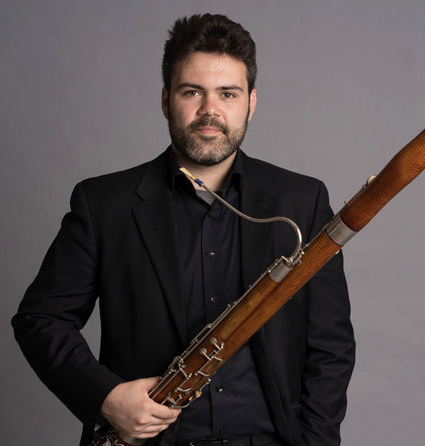 167 Bromery Center for the Arts

Noted for his “bubbling, charming” playing, Rémy Taghavi is a highly sought-after bassoonist and educator based in the Northeast, and has performed, toured and recorded with numerous groups across North America, South America, and Asia. Rémy has held the position of principal bassoon with the New Haven Symphony Orchestra since 2018 and has been a guest artist with the American Youth, Cape, and Princeton Symphonies. He has previously been an associate member of the Civic Orchestra of Chicago and a substitute with Symphony in C, and has played under conductors including Sir Simon Rattle, Alan Gilbert, and James Conlon. Mr. Taghavi has performed as a soloist with the Stony Brook Symphony Orchestra and the New York Symphonic Ensemble at Fukuoka Symphony Hall and the United Nations.

As a chamber musician, Rémy has given performances at the Banff Centre, Domaine Forget, Bravo! Vail, the Atlantic Music Festival, FIMAC, Montréal/New Musics Festival, and the Annapolis Chamber Music Festival, of which he is co-director and founder. Mr. Taghavi is the bassoonist in Frisson, the New York-based nonet whose performances have been called “musical perfection” (Royal Gazette, Bermuda). He is also a member of SoundMind, a modern wind quintet which performs music by living composers alongside re-imagined works from across an expanse of style, genre, and instrumentation. Rémy is an alumnus of Ensemble Connect, a chamber music and career-development fellowship of Carnegie Hall and the Juilliard School.

167 Bromery Center for the Arts