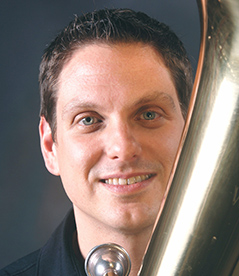 277 Bromery Center for the Arts

John also maintains an active performing career as an orchestral and chamber musician and has performed with such groups as the Cincinnati Symphony and Pops Orchestra, Milwaukee Symphony, West Virginia Symphony, Cincinnati Opera and Ballet Orchestras, and the Albany Symphony Orchestra.

His career has also taken him to Germany, where he performed with the Philharmonie Der Nationen under the baton of Justus Frantz. As a founding member of the Manhattan Brass Quintet he won prizes at the Fischoff National Chamber Music Competition and the New York Brass Conference.

Dr. Bottomley received his D.M.A. from The Ohio State University under tubist Jim Akins of the Columbus Symphony Orchestra. He holds a Master of Music Degree from the Manhattan School of Music and was among the first to graduate from the orchestral performance degree program. While in New York he studied with Toby Hanks, former tubist of the New York City Ballet and the New York Brass Quintet. He completed his Bachelor of Music at the University of Wisconsin-Madison while studying with tubist and composer John Stevens.

John resides in Amherst with his Coonhound "Holly." John donates to the Ohio Basset Hound Rescue and strongly encourages the hound dog as a good household music critic.

277 Bromery Center for the Arts