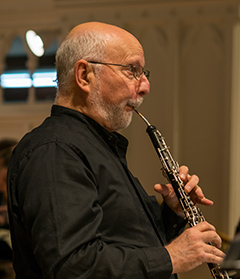 272 Bromery Center for the Arts

A native of Philadelphia, Pennsylvania, Fredric T. Cohen holds the BM/BME degree from the Philadelphia Musical Academy where he studied with Stevens Hewitt. In addition, Professor Cohen was a student of Jerry Sirucek at Indiana University and studied privately with John De Lancie and Marcel Moyse.

An active performer as well as teacher, Professor Cohen recently retired after 32 seasons as principal oboist with the Springfield Symphony Orchestra. He performs regularly with the Avanti Wind Quintet, a faculty chamber music ensemble in residence at the University, and is a recitalist and clinician. He has been the resident conductor and coordinator of orchestral activities at the University and is the conductor of the orchestra and head of the woodwind program at the Greenwood Music Camp.

He has performed as soloist and principal oboist with the Harvard Chamber Orchestra, Boston Composers Orchestra, Boston Baroque, Arcadia Players (period instruments) and Collage. He has taught oboe, coached chamber music, and conducted Wind Ensembles at the New England Conservatory of Music, Boston University, Boston Conservatory of Music, Longy School of Music and the Great Woods Festival and can be heard on recordings issued by Telarc, Gasparo, Northeastern, Gunmar, BEEP, and Opus One Records.

In addition, Professor Cohen has toured in Europe and the United States with the Vienna Chamber Orchestra. As soloist, he has premiered concertos by Salvatore Macchia (with the Springfield Symphony), Robert Nieske, Hsueh Yung Shen, Christopher Morris, and Ivan Tcherepnin. He has been a guest artist with such ensembles as the Muir Quartet, the Massachusetts Chamber Players, The Arcadia Players, Boston Baroque, and has performed at the Connecticut Early Music Festival, the Mohawk Trails concerts, Musicorda, and many other festivals. He was a featured artist in the British Double Reed Society's oboe festival at Christ Church College in Canterbury, England, at the 1996 International Double Reed Society's conference in Rotterdam, the Netherlands and at the 2007 IDRS conference in Ithaca, New York. In June of 2001, Mr. Cohen went to England where he was the oboe soloist with the Folkestone and Hythe Orchestra performing the Concerto for Oboe by Mozart. He returned to England in August 2002 to be in residence at the Dartington International Summer School where he gave the oboe master class and performed chamber music.

272 Bromery Center for the Arts