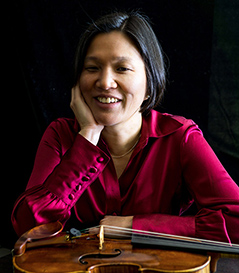 283 Bromery Center for the Arts

Elizabeth Chang, Artistic Director and violinist, enjoys a varied career as performer, teacher, and arts administrator. She is currently Professor of Violin at the University of Massachusetts Amherst and a faculty member of the Pre-College Division of the Juilliard School, and previously served on the faculties of Rutgers and New York University.

Throughout her career, Ms. Chang has embraced leadership roles in the arts community. In September 2021 she was appointed Artistic Director of Green Mountain Chamber Music Festival, one of the pre-eminent summer study programs for string players. She is also founder and director/co-director of the Lighthouse Chamber Players, Five College New Music Festival, UMass Amherst Bach Festival and Symposium, and Long River Concerts, among other projects. She has an active chamber music career, collaborating with some of the most prominent artists in the field, and has appeared as soloist, chamber musician and master class teacher in South America, Europe, and Asia.

In 2021, Ms. Chang released the critically acclaimed CD Transformations: Works by Kirchner, Sessions, and Schoenberg with Albany Records. A native New Yorker, Ms. Chang is a graduate of Harvard University and was the recipient of the Presidential Scholar in the Arts Award. She was a student of Louise Behrend, Joseph Fuchs, Roman Totenberg, Max Rostal, Leon Kirchner and Luise Vosgerchian.

Ms. Chang joined the faculty of the University of Massachusetts Amherst in 2005.

283 Bromery Center for the Arts