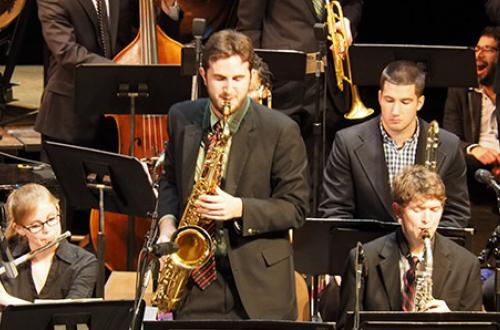 Jazz drummer Thomas Giampietro was featured on the Sabian Cymbal artist's page. He released his first CD as a leader, A Faith Rewarded, available on CDBaby (see Recordings).

Catherine Jensen-Hole was guest conductor of the Maine All State Honors Jazz Choir.  She performed and taught for two weeks at the 2012 Jazz in July program.

Of One's Own, the CD of the Jeff Holmes Quartet, was released by Miles High Records. The CD includes acoustic jazz quartet music featuring five original works by Professor Holmes, re-workings of the standards Poinciana and So Long Farewell (from the Sound of Music), and arrangements of contemporary and more traditional straight ahead jazz with Latin and Gospel influences.  The CD is available locally at Turn It Up, Barnes & Noble, Newbury Comics, Amherst Music House and Gerry’s Music, and on amazon.com, itunes and cduniverse.

Felipe Salles’ CD Ugandan Suite made Downbeat's Best CD's of 2014 list and received this review from All About Jazz: "Shape-shifting tunes, influences from all over the globe, superb musicianship, layered percussions, an inspired two reed front line rising up from those ebullient layerings, and an ensemble groove of the highest order make Ugandan Suite one of the year's highlights." Salles' previous CD, Departure, was on Downbeat's Best CDs of 2013 list. Salles' Northeastern Suite is being performed by the UMass Wind Ensemble at the New England Saxophone Festival, April 14, 2018.

Alto saxophonist Libby Richman '76 performed in the New York City area with her jazz group (including her husband John Philpott) at Wave Hill Garden and Cultural Center, Bronx, as part of the BxIndie Music at Sunset concert series.  She celebrated Women's History Month with a concert at The Ferguson Library, Stamford, CT.

Jonathan Mele ’93, MM’95 plays in and around New York City, including gigs with Dave Lalama and backing the late Joan Rivers.  He recorded and mixed tracks at his studio for the band Brewster and singer Jerry Costanzo.  In Spain, he played in Seville and Cadiz with Carlos Bermudo ’93 and presented a drumset masterclass at the Andalusia Center for Contemporary Art's Monastery of Cartuja in Seville.

David Pope '95, saxophonist and composer, was named Distinguished Teacher of the College of Visual and Performing Arts at James Madison University  for 2012-13.  He has been on the faculty since 2000 and recently presented a recital at the Kennedy Center in Washington, D.C.

Big Boss, a new CD by composer and jazz guitarist Charlie Apicella ’01, released on the ZOHO label, reveals his jazz-funk style with his band Iron City.  One of his lessons was published in Downbeat.