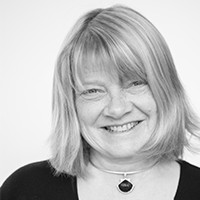 Copper Frances Giloth is currently Professor of Art at the University of Massachusetts Amherst having joined the faculty in 1985; she currently teaches courses in Digital Media, Information Design, Mobile Apps and Drawing. Previously, she spent many years as Director of Academic Computing in the Office of Information Technologies while continuing to teach part-time.

Giloth’s projects take the form of drawings, books, animations, videos, websites and installations. Her work has been exhibited in the U.S., Japan, Canada, and across Europe. In July 2014 she released “Labyrinth-of-Fables,” a 3D virtual reality mobile app that allows users to experience the Labyrinth of Versailles—which was constructed starting in 1665 and destroyed in 1775—either remotely or at the original site (http://www.labyrinth-of-fables.com/en/). An HTC Vive VR version was released in June 2018 improving upon an earlier Oculus Rift version from 2015. Her series of laser cut prints, “Alphabet Gestures,” was at Odetta Gallery, New York, in April–-May 2018 during Creative Tech Week and a solo exhibition of her artist book/daily practice piece “The Sudoku Diaries: Gaining or Seeding Control” was on view at Herter Gallery at the University of Massachusetts Amherst in Sep–-Oct 2015. Her research papers can be found at ResearchGate.

In 1980, she was the first graduate of the MFA program in Electronic Visualization at the University of Illinois Chicago. Much of her earliest work was among the pioneering efforts in the then nascent field of computer art and computer graphics. She organized the first two international ACM Siggraph Art Show competitions in 1982 and 1983. The latter travelled to 30 locations in the U.S., Canada, France, and Japan. Her website documenting the1982 exhibition is located at: http://people.umass.edu/sig82art/ She is featured in New Media Futures: The Rise of Women in the Digital Arts (2018) published by the University of Illinois Press.

On Sabbatical in France