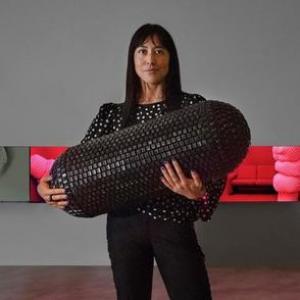 Katherine Behar is an interdisciplinary media and performance artist whose works exploring issues of gender and labor in contemporary digital culture have appeared throughout North America and Europe. She is known for projects that mix low and high technologies to create hybrid forms that are by turns humorous and sensuous. Pera Museum in Istanbul presented Katherine Behar: Data's Entry | Veri Girişi, a comprehensive survey exhibition and catalog, in 2016. In 2018, Robert Morris University presented her solo exhibition, Katherine Behar: Anonymous Autonomous. Her 2014 solo exhibition and catalog, Katherine Behar: E-Waste, premiered at University of Kentucky before traveling to Boston Cyberarts Gallery. Since 2005 she has collaborated with Marianne M. Kim, exhibiting and performing as "Disorientalism." Behar is the editor of Object-Oriented Feminism, published by University of Minnesota Press in 2016. Her publications And Another Thing: Nonanthropocentrism and Art, coedited with Emmy Mikelson, and Bigger than You: Big Data and Obesity were published by punctum books the same year. Fellowships and residencies include The MacDowell Colony, Nida Art Colony, Pioneer Works, Art Journal, Wassaic Project, Rubin Museum, Franklin Furnace, and others. Behar holds an MFA in Combined Media from Hunter College, an MA in Media Ecology from New York University, and a BFA from the School of the Art Institute of Chicago. She is based in Brooklyn and is Associate Professor of New Media Arts at Baruch College, CUNY.